‘If only I could recover one icon from the Turks.’ – NRC.nl 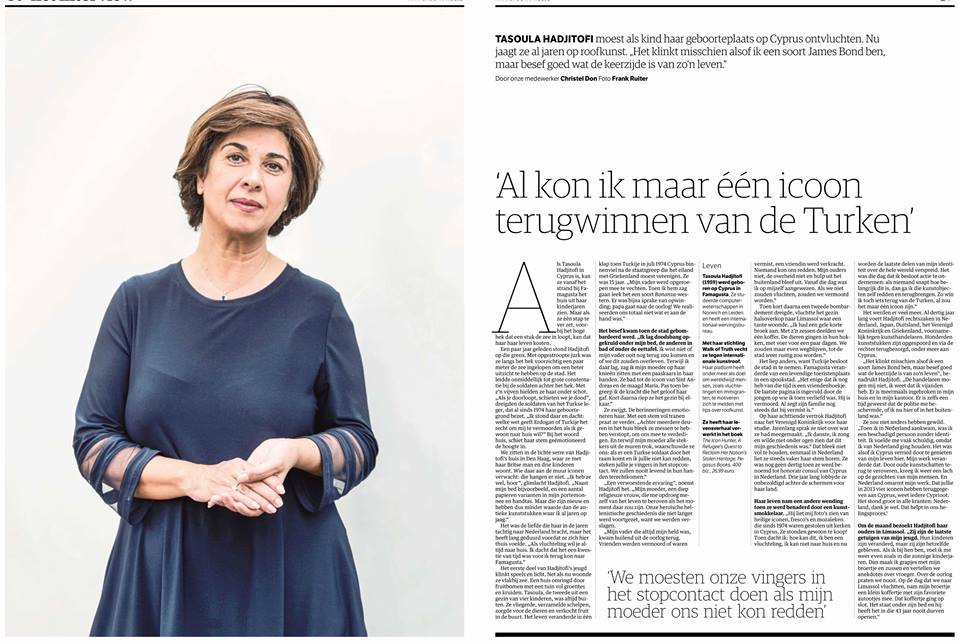 Tasoula Hadjitofi had to flee her birthplace in Cyprus as a child. Now she has been chasing looted art for years. ‘It might sound like I’m some kind of James Bond, but you must understand that there is a big downside to this kind of life.’

When Tasoula Hadjitofi is in Cyprus, she can see her childhood home from the beach near Famagusta. But were she to take a step too far, beyond the high fence which even extends into the sea, it would cost her her life. This is not a hypothetical situation: several years ago Hadjitofi actually stood by that border. She rolled up her dress and carefully waded a few metres into the sea, alongside the fence, to get a better view of the city.  This immediately caused great consternation amongst the Turkish soldiers on the far side of the barrier. The five men of the Turkish army, that has occupied her birthplace in 1974, trained their guns on her. ‘If you walk any further, we’ll shoot you,’ they threatened. ‘I stood there and thought, what law gives Erdogan or Turkey the right to kill me for just wanting to go home?’ Hadjitofi’s voice rose emotionally as she uttered the word ‘home’.

We were sitting in the bright conservatory in Hadjitofi’s home in The Hague, where she lives with her British husband and three children. One might expect icons to be hanging on the wall. But I found none. ‘I have many of them’, Hadjitofi said with a smile. ‘Next to my bed, for instance, and some paper ones in my wallet and purse. But they’re new, and so have less value than the antique works of art I’ve spent years tracking down.’ It was love that brought her to the Netherlands in the 1980s, but it took a long time for her to feel at home here. ‘As a refugee, you always want to go home. I thought it would be a question of time before things in Famagusta would be resolved and I would be able to return.’

The first part of Hadjitofi’s youth sounds carefree and happy. She lived near the sea, as she does now. Her house was surrounded by fruit trees, in a garden full of vegetables and herbs. Hadjitofi, the second of four children, was always outdoors. She flew kites, collected shells, took care of the animals and sold fruit in the neighbourhood. Her life was turned upside down when Turkey invaded Cyprus in July 1974, in response to a coup that was staged to unite the island with Greece. Hadjitofi was 15 years old. ‘My father was called up to fight. When I saw him leaving it was like an episode from Bonanza. It was almost exciting: dad is going to war! We had no idea what was going on.’

They soon did when the city was bombed. ‘I cowered in terror under my bed, the others were in the bath or under the dining room table. I didn’t know whether my father would ever come back or whether we would survive. Lying there, I saw my mother on her knees with a Paschal candle in her hands. She was praying to the icon of Saint Andrew and the Virgin Mary. It was only then that I understood the power faith gave her. Shortly afterward she called the family together.’ Hadjitofi paused – the recollection was upsetting her. She continued, her voice strained by tears. ‘After pulling all the plugs out of the walls, she told us that if a Turkish soldier were to come through the window, we were to put our fingers in the sockets. We would never be captured alive by them.’

She called it ‘a devastating experience’. ‘My mother, a deeply religious woman, instructed me to take my own life when the time came. Our heroic Hellenistic history would have come to an end, for we had been defeated. My father, who had always been my hero, returned from the war in tears. Friends had been killed or gone missing, and a female friend had been raped. No one could save us – neither my parents nor the government; aid from abroad failed to materialise. I had to rely on myself from that day on. If we hadn’t fled, we would have been killed.’

Shortly afterward there was a threat of a second bombardment, causing the family to flee to Limassol where an aunt lived. ‘I can remember I was wearing yellow shorts. The six of us shared one suitcase. We put the animals in their cages with enough food for a few days. We were only going away for a little while until things calmed down in the city.’ Things went differently, as Turkey decided to occupy the city.  Famagusta was transformed from a lively tourist resort into a ghost town. ‘The only thing I have left from that time is a friend book. The last page was written by the boy I was in love with. He was murdered – but his family still says he is missing.

When Hadjitofi was eighteen she went to study in the United Kingdom. For years, she did not talk about what she had been through. ‘I danced, I sang and I didn’t want to face up to the fact that this was my history.’ This proved untenable; after moving to the Netherlands, she spoke out more and more on the subject. She was not even thirty when she was appointed Honorary Consul of Cyprus in the Netherlands. For three years, she voluntarily lobbied behind the scenes for her country.

Her life changed dramatically when she was approached by the art smuggler Michel van Rijn. ‘He showed me photographs of sacred icons, frescoes, and mosaics that had been stolen from churches in Cyprus during and after the war in 1974. They were all up for sale! I thought: my God, I’m a refugee, I can’t go home, and now the last vestiges of my identity are being spread all over the world. It was the day I decided to act: if no one understands how important this is, I will save these works of art myself and return them to my country. This is how I can recover something from the Turks, even if it just one icon.’

The number of icons she has actually recovered over the years turned out to be far more than just one. In the course of thirty years, Hadjitofi has brought lawsuits in the Netherlands, Japan, Germany, England, and Greece, mainly against art dealers. Hundreds of pieces of art have been traced and the courts directed their return to Cyprus and other places. ‘It might sound like I’m some kind of James Bond, but you must understand that there is a big downside to this kind of life,’ Hadjitofi stressed. ‘The dealers don’t like me; I know I have enemies. My home and office have been burgled repeatedly. There was even a time when I had police protection, both here and abroad.’

Yet she would not have done otherwise. ‘When I came to the Netherlands, I was a devastated person without an identity. I often felt guilty for growing to love the Netherlands. It was as if by enjoying my life here I was betraying Cyprus. My work changed this – by reclaiming ancient art treasures, I have made my people smile again. The Netherlands also embraces my work – every Cypriot knows that [the Netherlands] returned four icons to Cyprus in 2013. It was prominently reported in all the newspapers: Thank you to the Netherlands. This helps us in our healing process.’

Hadjitofi visits her parents every other month in Limassol. ‘They are the last witnesses of my youth. Their children have changed, but they have stayed the same. When I’m with them I feel for a moment as I did in my sunny childhood. I make jokes with my brother and sisters, and we tell anecdotes about the past. We never talk about the war. When we fled to Limassol, my brother took a small suitcase with his favourite toy cars. He locked the case. He keeps it under his bed hasn’t dared to open it in the past 43 years.’

Tasoula Hadjitofi (1959) was born in Famagusta in Cyprus, which has become a ghost town since the Turkish occupation in 1974.

She studied computer science in Norwich and Leiden and has an international recruitment agency for English-speaking professionals.

She combats the international art trade with her foundation Walk of Truth. Hadjitofi wants to use her platform to motivate people all over the world (including refugees and immigrants) to give tips on looted art. This information can then be analysed by her global network.

Tasoula Hadjitofi has recounted her life story in a book, The Icon Hunter, which is being published on Thursday, 11 April by Pegasus Books.