An auction of a collection of Cypriot antiquities and paintings owned by a Cypriot Honorary Consul in the USA raised around $250,000 (€215,000), according to the auctioneer’s website.

The auction was held at the behest of the daughter of Dr Takey Crist, 81, who was the founder of the Cyprus Museum in Jacksonville, North Carolina, where he is also Cyprus’ Honorary Consul. Crist’s daughter assumed power of attorney over her father’s affairs as his health faded in recent years and the museum had been forced to close but while open it exhibited hundreds of Cypriot items, some so unique that they can’t be found in museums in Cyprus. 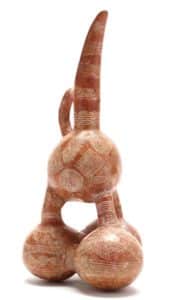 Fetching the most at Friday’s auction – $13,000 – was a rare Cypriot early Bronze Age polished red ware vessel, while a limestone bust of a Cypriot priest or votary raised $8,800 and a Cypro-Archaic terracotta chariot with three warriors garnered $4,400.

Tasoula Hadjitofi whose Walk of Truth NGO campaigns against profiteering from the trafficking of cultural heritage items by auction houses and their clients – had reached out to Dr Crist to stop the auction. She argues the antiquities “hold shared memories and sometimes religious value for communities” and should be in the public realm. And many of the artefacts in the auction have problematic provenance.

The Department of Antiquities had also appealed for the auction to be postponed until expert evaluation of the artefacts’ provenance, but the pleas were not heeded and the auction closed as scheduled.

As such, Cypriot authorities have asked the US law enforcement to intervene, acting under the 1970 Unesco Convention on the Means of Prohibiting and Preventing the Illicit Import, Export and Transport of Ownership of Cultural Property, as well as a bilateral Memorandum of Understanding between Cyprus and the United States concerning antiquities renewed in 2017. Interpol has been informed of the matter and ultimately, the United States could seize the auctioned items if they are found to have problematic provenance.

Auction houses in the United States are renowned for a ‘caveat emptor’ approach that might ignore an item’s provenance or lack thereof, as revealed by several sting operations. It remains to be seen whether or not Dr Crist’s complete collection was listed; what is feared by one antiquities expert is that the Crist family might be in the possession of further artefacts and if they find the recent auction went smoothly, they may then feel emboldened to reach out to more prestigious auction houses, such as Sotheby’s and Christie’s, with further items.